I’ve been traveling to different startup communities for a while now. Last year I visited Victoria, Cincinnati, Chicago, and Winnipeg. This year I’ve been to Toronto and Kelowna, will be heading back to Winnipeg, and have Halton and Qualicum Beach planned. This is the first of my startup community trip reports.

My startup community visits usually have the same handful of elements: an event or workshop where I give a presentation to a group of people (often followed by a group social / networking event), some office hours where I get to meet people one-on-one, and then a smattering of meetings with interesting people & places. And restaurants, because in my non-tech life, I enjoy unique food experiences.

Last week I spent two days in Kelowna. I went because I connected with the Predicative team when they were coming through Vancouver, and wanted to find out more about what’s going on in this community.

It’s a long drive (~5 hours) to Kelowna, but they have an international airport which is an easy 1 hour flight from Vancouver. Looking to go back and forth from SFO? Pretty easy! The Predicative team were kind enough to shuttle me from the airport.

I’ve been to Kelowna / the Okanagan region perhaps half a dozen times over the years, but always purely for a vacation, which meant time on the lake or at various wineries and lots of driving. I was pleasantly surprised to find a relatively dense and walkable downtown core. While small, it reminds me of the mini Main Streets I’ve seen in Palo Alto and Boulder.

My timing was perhaps bad, in that I missed the annual Metabridge event that brings in startups and investors from across BC and up from the US by a month or so. But then again, my goal is to check in on the “baseline” of startup communities. Vancouver is very different when 500+ extra entrepreneurs are in town for GrowConf.

For my one-on-ones, I met with: 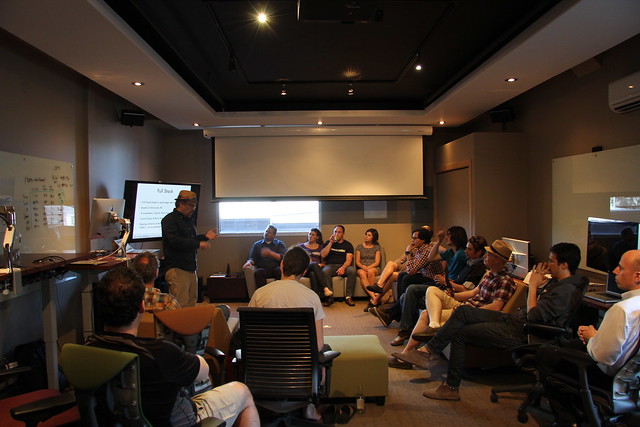 The evening event was in the Rocket Launch / Predicative space. We had everyone in the room introduce themselves, talk about what they were working on, and what their “ask” was. I gave my talk on Founders & Funders in Canada – with lots of tangents and Q&A digging into all sorts of things.

Predicative and Routezilla gave brief pitches about their businesses. I had met Routezilla’s founder Rob Ducharme in Vancouver as he was just on his way back from some time spent down in Silicon Valley, and I was impressed enough to want to see what else Kelowna had to offer.

This was the first talk that I was able to (somewhat) summarize the tangents in one tweet - use Intercom & Tapstream, Twitter cards are worth experimenting with, everyone should be on Angel List, every founder should have reverse vesting written into their shareholder’s agreement, Keybase / encryption is interesting, you probably shouldn’t join an accelerator in your own home town, and #mooseblood is the Canadian entrepreneur rallying cry.

Many people had long drives ahead of them to get home, but a few of us continued on for dinner and drinks and talked late into the night about startup ecosystems and community building.

I had a great meeting with Lane Merrifield, who is a local success story from founding Club Penguin, which sold to Disney. He’s now working on Freshgrade, as well as heavily involved in Accelerate Okanagan and the newly announced innovation hub.

I also met with Colin Basran, who is running for Mayor of Kelowna. We had a long chat about digital business ecosystems and what it takes to create & keep people, companies, and jobs locally. I told him a bit about the WeAreYVR / Startup Health Check project, and how the Okanagan region might use it to start documenting the people & startup businesses they have.

Colin and Lane both told me about the University of British Columbia’s Okanagan Campus, which is in Kelowna and has nearly 10,000 students attending it.

I also went for a long walk & talk along the lake shore with a local angel investor. Like Vancouver, there are limited opportunities for entrepreneurs to get in front of investors. Kelowna is well known for some recent exits – such as Lane’s Club Penguin acquisition by Disney, or the more recent Vineyard Networks to Procera Networks acquisition. It is also known as a place with well off individuals from Vancouver, the US, and Alberta having second homes. More discussion is needed, but we’re look at having an Open Angel Canada chapter seed here in Kelowna.

I should probably just call this section the “here is some food I ate” part of the report! (I still fondly remember the slab of tourtière I had in Winnipeg at Peasant Cookery).

I took a bunch of the Predicative team for breakfast at the Bohemian Cafe – aka the Boh. I got the “home made” platter – home made bread, sausages, and back bacon.

Sarah shared the secret of getting the aquaponics tank at the awesome Freshgrade office working, which I took straight back home to implement at StackHaus.

I had a delicious laksa from the Mad Mango Cafe. It is relatively rare to see this Malaysian / Singaporean coconut curry soup done right, and despite this take out container, it was really delicious.

Interested in having me visit your startup community? Get in touch - I love hearing from entrepreneurs & investors from local regions.